MONROE, MICHIGAN, February 25, 2015 – eScapes Network LLC and ProMedica, a not-for-profit healthcare organization in Toledo, Ohio entered into an agreement in which eScapes will create a Private Television Network (PTN) and a digital message board platform to effectively deliver the Network’s proven Therapeutic Television content, ProMedica’s branding and educational messaging along with Public Service announcements across their health system. eScapes will install approximately 300 PTN systems in ProMedica’s hospitals, remote medical facilities and doctor’s offices.

eScapes Network’s CEO, Roy Radakovich said, “ProMedica’s year-long partnering search was a very careful and thorough process due to the importance of the their Corporate Branding Strategy coupled with other demanding objectives including ease of use, flexibility and scalability. eScapes’ PTN solution met or exceeded all of these objectives and provided therapeutic content to sooth, educate, and inform patients, while providing an entertaining and relaxing atmosphere for ProMedica’s staff.” He concluded with, “Another important benefit of eScapes’ therapeutic content is a perceived reduction in patient wait time.”

ProMedica’s Associate Vice-President Marketing & Advertising, Kathleen Merrill commented about the partnership with eScapes saying, “We were looking for a way to share information with our employees, patients and visitors and eScapes offered a solution that not only maximizes our ability to communicate a wide variety of news and announcements, but we’ll be able to do it in a unique way that enhances every environment it’s featured in.” Kathleen added, “People are naturally drawn to eScapes’ beautiful content which makes a perfect backdrop for our messaging, and with our PTN, we’ll be able to instantly update every location in our network.” 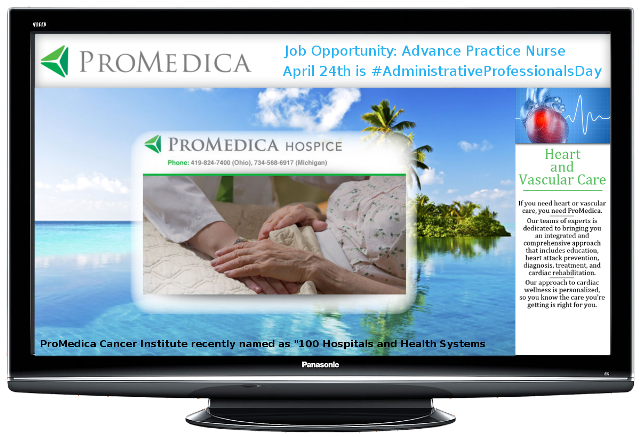 About eScapes – Established in 2010 and headquartered in Monroe, Michigan, the Network is available in the Northern Hemisphere on the Galaxy 16 Satellite/Transponder 5, providing everything you love about radio, with HD video from around the world – 24/7. A Private Television Network, with US-patented Hybrid Radio/Television content, is customer-branded television creating a relaxing atmosphere and reinforcing your brand with place-based marketing. For more PTN information contact Jon Oswald, General Manager, Jon@escapes.net, (734) 241-4410 or visit us at www.myPTN.com.